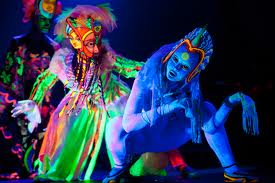 Simon Posford aka Hallucinogen met Marge from Looney Moon on May 3rd 2008, when he came to play at Looney Moon\Maitake Production Space Distortion party at Ranch, in Torino, Italy.

Since Shpongle's first album, chill out music and culture have gone a long way...In what do you feel they have changed?

I don‘t know if Chill out music and culture have changed, it depends where you are, who is playing, what kind of party it is. But I suppose it is true that there are more and more Chill out artists getting bigger and bigger. In fact, the first time we did Younger Brother, we did our gig at Brixton Academy in London, a very big venue. That was more of a show, a concert rather than a set in a chill-out room. I suppose ten-fifteen years ago, people just wanted Trance and just wanted to dance to it. Now people are more opened to a bit of everything, as long as it is psychedelic and interesting. Of course it depends what you mean by Chill Out music; for instance, Brian Eno‘s music is very ambient and he does art installations as well. His work is far away from a psychedelic trance party.